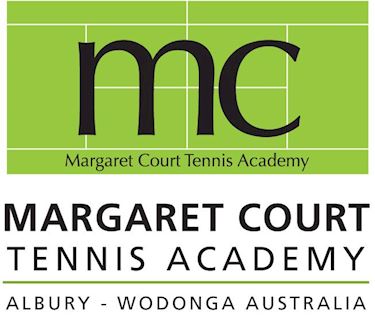 The Wodonga Tennis Centre is extremely proud to have the Margaret Court Tennis Academy as its resident coaching business.

The Margaret Court Tennis Academy first formed at the Wodonga Tennis Centre in October 2007. Phil Shanahan, nephew of Tennis Legend Margaret Court, wanted to name the Academy after his aunt.

Winner of 62 Grand Slam Titles, Margaret Court is the greatest player of all time.

"Margaret is a National Treasure and her name needs to live on. The Academy honours her and gives future generations of players an inspirational role model to aspire to." (Phil Shanahan)

Coaches Phil Shanahan, Mark Shanahan and Cameron Meagher came together to form the academy. With 48 courts at the Wodonga Tennis Centre, the Margaret Court Tennis Academy found a wonderful home.

The Academy expanded its vision across the Border to the St Pat's Tennis Centre.

In January 2008, Margaret and her husband Barry came to Albury/Wodonga and were very excited about the Academy.

"Many of Australia's greatest players came from the country. Albury/Wodonga with its exceptional facilities is a wonderful location for a regional academy." (Margaret Court)

An academy that develops players at all levels to achieve their potential and ambitions through the development of technique, self belief, motivation, discipline and hard work as Margaret Court has done all her life.

"The best is yet to come"