MALENY TENNIS CLUB - join us in being a part of it's history!

The Maleny Tennis Club was formed in 1926. Two courts were laid on the Maleny Showgrounds, probably with Shire Council assistance and voluntary work done by the prospective Club members.

Apart from several private courts in the district and several school courts the only courts available to the public were situated on the Witta sports ground. Several names of people who were among the early players (were) Shapter, Evans, Harwood, Hankinson, Mogridge, Grundon and Waters. 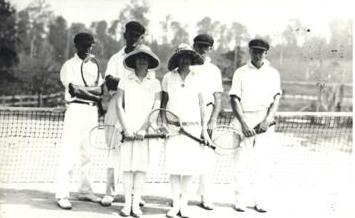 The top dressing of clay probably came from the Vandrikes (?) at Witta. One court was later surfaced with a bitumen-like product which enabled play to take place earlier after rain. The surface was hard on balls and sandshoes and was hot in summer. It was torn up and replaced in the fifties by clay.

The interest in tennis was carried on largely by a handful of players during the war years. Names that come to mind are Bill Yelland who was the Postmaster and A. C. (Mac) McCracken. Post-war 1946 the interest in tennis increased and a third court was laid down by the Club members, and many hands worked in the levelling in the same way as a concrete floor is laid. The Maleny Youth Club persuaded the council to provide a court for their members, but interest waned and essentially the Maleny Tennis Club took it over.

During the existence of the North Coast Tennis Council, comprising associations from Yandina to Redcliffe, Maleny Club courts became the home courts for the Maleny Association. At first the matches were played by eight teams, four at home and four away, which somewhat stretched our resources, even though several teams from Landsborough to Alexandra played in the Maleny Association. Matches were played on Sundays only and our courts were the centre of increased tennis interest. On match days the teams consisted of two ladies and four men (twelve sets).

The short cut to the courts was over the log footbridge for town dwellers. Floods periodically washed away or dislodged the footbridge, and then began the hunt for a new log and the where-with-all to put it in place.

Our courts needed a lot of maintenance and preparation. Apart from the occasional working bee and ”all hands on deck”, special individuals are worthy of mention. Wally Petersen, the accountant at the nearby butter factory was the chief court preparer and court marker for about twenty-five years, sometimes with helpers. Jack Thorne began to assist Wally, and, together with others, for several years looked after the courts. The club members and other players should be grateful for the unselfish time and energy spent in providing for our enjoyment.

The clubhouse was built about the late fifties and provided a much-needed amenity. Prior to the (provision of) town water supply water for the courts was made available from the Maleny Dairy Association and the chairman of the same was invited to be the Club Patron.

Member and Patron for many years.

(notes provided by Alan Webster circa 2003)