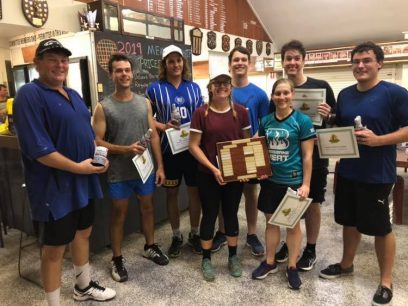 Finals of Summer Season 1 were played in great spirit! The winning combination of Wayne, Aidan, Ned, Josie, Jack, Gemma, Blake and Brendan (filling in for Leah) and Dianne (absent from the photo) proved to be too consistent for BME Bin Chickens. The final score was 61-41. Dianne and Gemma were the most consistent for the Hawks.

Congratulations to the Hawks for being both the Minor Premiers and Premiers. Your names will go down in Home Hill Tennis History!

The play off for 3rd and 4th between Laser and Evolution had the final score 56 -37 in Lasers favour. James had a ripper of a night with he and Mick W teaming up to chalk up an 8-0 win, the biggest winning margin for the season. Adam also has a great night playing some consistent tennis for Evolution.

Dallan proved once again proved how consistent he is by chalking up another 3 set win, the third for the season. Well done Dallan.

A big thanks to Slatch’s Mobile Marine for sponsoring the prizes for the season. The stubby coolers are appreciated!

We look forward to seeing everyone back for our Autumn season, which kicks off Easter Monday April 22nd.

If you are interested in getting involved in a fun, social sport, we hope to see you there!